By rene
Travel Reports
No Comments

Amsterdam is a very vibrant city during New Year’s Eve. The city is very busy and going around can be a pain. We had planned to check in on some of the coffeeshops that were about to cease business. This turned out to be a good decision and resulted in getting some background information on why they had to close. For privacy reasons we will not tell you in what coffeeshop we had a chance to talk to the owner and due to that I will not go into detail on any of the closed down shops. 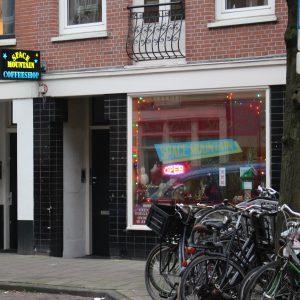 Coffeeshop Space Mountain on the last day it was open.

After a short walk and a few stops we decided to have a coffee. We ordered at the counter and took our seat. While the coffee was prepared we asked the dealer if it was one of the shops that had to close down. His first reaction was sadness, we could feel the sadness he was in. You could immediately feel that the policy had destroyed at least one existence. There was some tension and silence for a few minutes. Then another customer appeared and the ice slowly got broken. We were chatting to the other customer for a little while about casual things in life. Till the topic came up with him as well. This lead to a longer talk about the policy. It turned out that the distance off this coffeeshop is just 20 meters inside the 250 meter distance.

So we asked about the policy and why it was created.

The policy that makes shops close down is a compromise to be able to have coffeeshops operate without the wietpass. The wietpass is a system that was introduced in 2012, had the goal to make coffeeshops only available for Dutch residents. This change would have caused a large setback for Amsterdam and thus why the policy that prevents coffeeshops in 250m distance to a school was created. The actual reason that you get to hear when you ask, is that it is about the protection of minors. The enforcement of this policy is done based on measurements done with a measure wheel and the distance that matters is entry to entry. So when the way between the school entry and the coffeeshop entry is less than 250m the coffeeshop had to close. 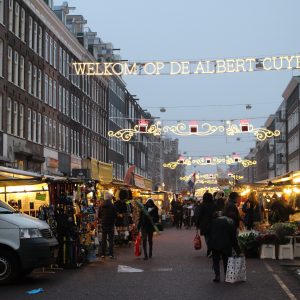 The result of the change is not like you might imaging. We were contacted by someone that worked on an Intraval study about the distance criterion. The study concludes that it makes no difference to close the shop. Still the shops get closed and small businesses eradicated. The dealer we were talking to was running his shop for 17 years. It’s really sad to see how a policy can cause an end to a well operational tax paying business. Considering the way of the measurement there come up some more questions. Dealing with being just a few meters inside the range and the measurement being done with a walking measure has to lead to discussions. For the coffeeshop we’re at, it where 20 meters, that’s like crossing the street twice.

The actual reason for shutting down the coffeeshops is that Amsterdam decided to introduce the distance criterion instead of the wietpas. That’s great for travellers but not so good for the shops that had to close. So when you go around the city show your respect when you come by a closed coffeeshop, as it is likely gone for your entertainment.

After that informative talk we continued our preparation for New Year’s Eve. During the preparation for the New Year we visited a lot of coffeeshops so I’m just going to focus on the most important for us. At Media we got Champagne Haze for €14/g. Our tour lead on to De Keeper to grab some Bio for €6.5/g. And we collected a little more than a half gram Moonrock from 1e hulp at €45/g. A Moonrock is a special little thing. It’s a bud of weed that gets dunked into dab and then rolled in kief. The smaller the bud the better the ratio for the customer. The Moonrocks look like little rocks, when you break them open you can see the great structure the product has. Be prepared for sticky fingers while preparing for consummation.

The night in Amsterdam

As a relaxed couple we didn’t head right to the center for the night. But here is what you can expect. The center is flooded with people. The public transport stops its service early and the night busses start late. So when you want to party in the center make sure to be good at walking or even in walking distance to the Dam. People will be standing everywhere and fireworks go off all over the place.

Since we are more relaxed, we took a walk around the neighborhood and celebrated the start of the New Year near to the Heineken Experience. The weather was not that great, it was still misty thus not much fireworks could be seen but you could hear it go off all over the city.

What will the New Year bring?

The year 2016 was a hard and long year for a lot of people. There is still war going on in the near east. So let’s be thankful for what was given to us and keep on sharing in an effort to make the world a better place. Let’s make 2017 a fabulous year together. Stay positive, work hard and don’t fear change.

With that note we close down for today. Stay tuned for the report of the other days.