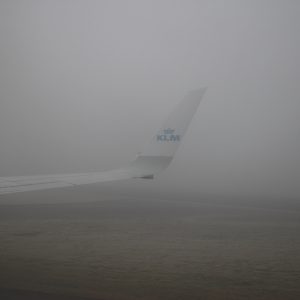 Landing in Schiphol under foggy conditions

It all started with a message from KLM, flight delayed by 1 hour. Not thinking about anything bad we arrived at the airport. After all we got lucky to fly with KLM. It turned out the weather in Schiphol was really bad and fog caused massive delays and cancellations. The Austian Airlines flight was canceled. And our flight was delayed by 3 hours.

The approach to Schiphol was strange. I even had an argument about whether it was fog or clouds. Only to notice that the cloudy plane that could be seen from above was fog and that the Polderbaan was just inside that wall of mist.

Getting to the City

Travelling with hand luggage is a great tip when doing air travel. You grab your bag and don’t have to wait at the luggage conveyor.

With a little routine you can make the way from your gate to the trains in around 10 minutes. From there you have a train, that brings you to Amsterdam Centraal, every 10 minutes. When you pay with ov-chipkaart the fare is € 4,20.

The first stop in the center

After getting off the train you find yourself in a vibrant spot. Many people use this train station on a regularly basis. Many Tram lines and Metro lines have a stop here.

But our first stop was something different. It was Voyagers. Voyagers is a small coffeshop with an interesting twist. It also runs a hostel/hotel. The location could make it a great base of operation for future travelling. A short look at the menu and Pineapple Express for €10 made sure the way to our base was taken care off.

PhilDutch runs a Houseboat for rental. You can rent different parts of his boat and he is an amazing guy. I’m pretty sure you will read more about him over the next days.

The location of PhilDutch’s houseboat is great it’s not far from, the soon to close down, Mellow Yellow and Club Media isn’t far away as well.

We have a date 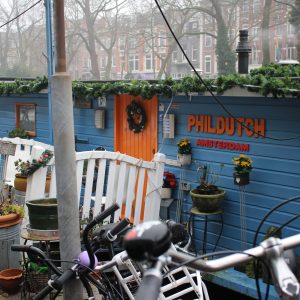 Since we had our arrival planned different we had arranged to meet some friends at Amsterdam Centraal and time was running short. Trams in Amsterdam can be crowded, make sure to plan accordingly. Even with the missed tram and a walk trough the city, we only arrived 10 minutes late.

We wanted to have a drink and so we set sail on the search for a nice coffeeshop to have a seat. We tried at Popeye’s but it was full, as well as Dampkring and Green House. Since we planed to walk around the center for a while we took a left turn and found a seat at Sibiere.

Sibiere has a nice menu with many organic outdoor strains on the list. We picked up a gram of Amnesia Haze for €12 sat down with our drinks and enjoyed the jazzy tunes that where played over the speakers.

Walking around that amazing city is great further most with friends is great. But finding a shop where you can have a seat can get tricky with a larger group. Our walk lead us around the city for a while. It started to get dark already and on our way around the city we ended up at Rick’s Coffeeshop. It was full as well but we choose An Orange Bud for €13 rolled up the weed and continued our walk. The girl at the bar was nice and even prepared an ashtray for us while we rolled up.

After some time it was time to end a long day and our ways parted.

While walking home we had some French Fries for not cheap €3,70 in a place not to be named. And walked towards Mellow Yellow to have a look at the menu and pick up 2g Blue Berry for €16. The we took a look at the Menu in Club Media. Their Carammelow for €11 is amazing we took the last. And the White Widow for €9,50 offers a great price value ratio. Club Media is a busy place and we met a nice guy from UK that bought in front of us. He was a great entertainer and caused some laughs during our shop stop.

Closing off a long day

To bring the day to an end we did some groceries at Dirk. And headed home to our cosy boat.

One thought on “Amsterdam – Day 1 a rough arrival”

[…] last trip to Amsterdam now was about 6 months ago and a lot changed during that time. During the last trips I was […]